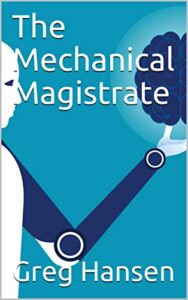 First, what a cracking start to a story. I loved it. A man on death row is executed. Then, in the next chapter, he wakes up. It isn’t a dosage error. It isn’t a strange afterlife—that was enough to hook me.

I wanted to know what happens next.

This was one of the best book openings I’ve read in a long time. I am a classic slow-burner with my own writing, my books build in pace, and it’s something I want to change. Hansen gets straight in there—bang. And you’re in action.

Phil, our hapless hero, wakes up, and I had no idea what was going on. I admit I was disappointed with the resolution. That said, it was well worked out and explained and very believable.

The story is good. It works. It has a beginning, middle and end, and everything ties up nicely. His characterisation is strong, and his ‘people’ are well-drawn.

The dialogue had a few problems, being very passive, but it reads naturally enough for the most part. His description is descriptive and draws clear pictures. Though the writing is inactive, the twist at the end works. It has a reasonable turnaround there. No problems with the story at all.

However, I have two issues with this book. The first was the size. This little boy barely makes it out of short trousers. At under 60 pages, It’s a novella but is marketed as a novel. There is a ton of potential in this book to expand and make it into a full-length book. It felt like laziness, ‘Let’s get this story written as fast as possible and get it out there so that I can move onto my next one. I felt cheated. My other problem is the writing.  There were errors and typos, and in general, the writing was clumsy. Another one that needs a tightening and polishing edit. If this was edited and expanded by another 70,000 words, it would make a cracking book. I give it 4 out of ten—3 for the story and an extra point for that fantastic opening.