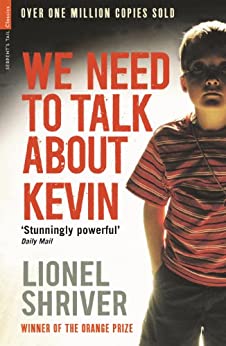 This is the only book in years that I have abandoned. International bestseller and a bitter disappointment. Positives first. The writing is eighty percent brilliant. It is intelligent and educated. Shriver has (probably) been to university, I assume she has a degree in psychology, and she knows what she’s writing about. There is some stunning and beautiful phrasing in there.  And, for somebody that like this kind of thing, it’s brilliant. I get it. Her characterisation is flawless. However, I trawled through 180 pages. I’ve been averaging two books a week. This took me three weeks, and I abandoned less than halfway through.  Authors put at least a year of their lives into writing a book—and the rest of it marketing the bloody things. I don’t give up on books. I feel that I owe it to the Author to see it through. Apart from that, people told me to stick with it because it has a fantastic kick-ass ending. In fact, the twist at the end was glaring and obvious. I admit, I never got that far. In fact, in my book, she didn’t even have a daughter at that point. I thought she was going to have the husband and younger daughter tied up in the basement.  Because I wasn’t enjoying it, I devised a cunning plan—and watched the film instead. Which was very good.

So, Why didn’t I like this book? The writing is brilliant. However, she is prone to lists. Eight consecutive sentences, for instance, beginning with, ‘Am I the woman that…’ I can grit my teeth, give an elaborate sigh and ignore that.  But, but, but, but, but, but (Try not to begin a sentence with but.)  But. She drones on for hundreds of thousands of millions of words about nothing. I had to dredge any element of actual story from the canal of all those empty words. She drones in eloquent soliloquy, but she drones on, nevertheless. She is clever for clever’s sake. She didn’t swallow a dictionary for breakfast—she binges on them bulimicly throughout the day and pukes up even bigger words. The writing is smug. On every page, I imagined her leaning back in her chair and telling herself how clever she is. Just tell us the damned story. The other reason I didn’t like this book is that I felt, and hubby said the same, that she was riding on other people’s misery. Early on in the book, she lists all the instances of ‘Columbine’ killings in America. Isn’t it awful that it even has a name? She made her fortune on the back of all the school killings. Doesn’t every writer do that? If we write killers, aren’t we all riding on every murder victim and their families?  This just seemed to be bandwagon jumping. In fairness I didn’t like this book because it was just too wordy and verbose. 1 out of 10.