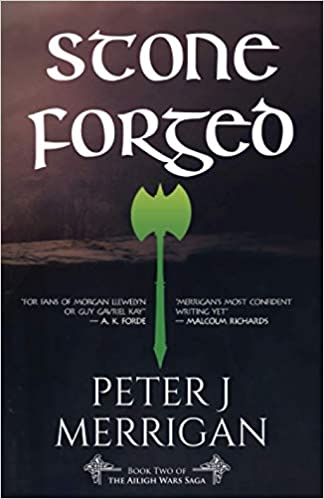 This is the second book in the Ailigh Wars Saga series and Peter J Merrigan doesn’t disappoint. We pick up on the characters we’ve come to care about two years after the first book, Stone Heart, finishes.

The rule of serial writing is that every book should be as good as the last. This one picks up in pace and mysticism and is even better than the first.

In this book, the sept is recovering after a great war. They suffered losses greater than they ever imagined. Ronan has lost his love, Aed, and the Kingship has been thrust upon him.

At seventeen year’s old, Ronan is the king of the North, the usual age for a king in times when the average age of mortality is thirty. What’s fascinating about this book are the people. Every character is written in colour, and the research into their way of life and what they had at their disposal is expert, with every detail checked and verified for authenticity.

The author writes these people from ancient times as though he walks among them. They are as real as old Fred who runs the corner shop. Every action they make is a consequence of what they’ve been told by the gods. If their child is sick, it’s because they have angered either the gods as a whole—this would be bad—or the god adored by the local people.

Appeasements have to be made in the form of ritual and sacrifice. Gods come to them in dreams and they speak through the druids. Then there are the signs, they are everywhere. Gods leave them signs in clouds, in the flow of the river, and the colours in a sunset. The gods are all-powerful and when they speak, the tribe listens, otherwise war the like of which has never been seen will befall them, or a great famine will smite their crops as they toil in the fields.

The women in this book are as integral to the story as the men, they have an equal voice and are fearsome and strong.  Grainne has completed her training and is the official druid for the tribe. She is watched over by the goddess who she calls, Her Most Gracious Lady Caer. She waits for visions of Caer whose earth form is a beautiful swan.

Merrigan has gone from excellent to whatever goes beyond that in this sequel. It is one of the most beautifully written books I have ever read. The last book is written with an astute intelligence beyond most books out there, and this expands on it. His knowledge and depth of research into Iron Age Celtic Ireland are exquisite. This is an indie book that feels like and deserves to be mainstream. I don’t believe there is a single error or typo, a statement many bestselling authors could aspire to.

I couldn’t put this book down.