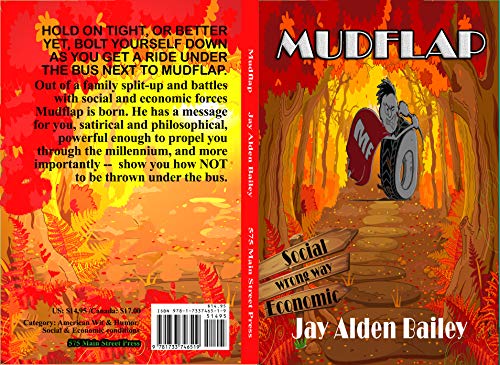 We had better open this one with the description of a mudflap. The author describes it far better in the book. Mudflap is somebody who goes out of his way to help others, only to be thrown under the bus. However, he refuses to lie down and be driven over, so he clings to the mudflap for the ride.

This book is excellent. I think the author was aiming for relatable, and it is. Everybody can identify with the sibling rivalry, schoolyard bullying, the pain and joy of being a kid. Later, the same experiences transpose into adult life—but they are ramped up to big-boy disputes. This is a story about hard work, struggle, success, knockbacks and success again.

We follow the life of one ordinary man living between Maine and Connecticut. A tree-feller and woodsman by trade, he makes good, loses it to divorce and debt, and makes good again. We are the voyeur standing outside and looking in through the window. However, to get to that window, you need a boat—or a robust front crawl.

This is a very American phenomenon, but along with lake living, it’s a ‘thing’ to buy an island on one of the big lakes. For a Brit living in a hicksville town in the north of England, it’s fascinating. We follow the author’s struggles as he buys not one but two islands and builds his homes—and he has his townhouse to fall back on in the winter. The islands belong to him, no neighbours. He’s the king of his own island to govern and protect. In England, we can relate it to a man’s home being his castle.

I love coincidence. And, because we’ve been bingeing Tim Roth, we watched a film called October Gale the other night. Okay, it was set in Calgary, Canada, but the premise is the same. There are six lakes around Calgary, all with buyable islands for people to put a summer home on. Purely because I was halfway through Mudflap, it brought the majesty and beauty of this lifestyle home to me. The film was terrible, an hour and a half of our lives that we’ll never see again—but the five minutes of photography at the end made it all worthwhile. Reading Mudflap is a far better use of time than that film. My dream life would be living six months of the year, completely alone and surrounded by water. Where nobody can get to me on a tiny Island—and just being able to write and work in peace—my idea of heaven.

Mudflap’s life is not all bliss, though. We have ongoing disputes with his employees, neighbours—he still needs an access road on the mainland—and family. Another joy in this book is the author’s love of nature and animals. We are introduced to his dogs and share his heartache when they go.  The story unfolds in a natural and easy-going way, and the style is stripped back and relaxed. However, the description is the star of this book. It’s a storytelling delight to read.

Every chapter starts with a Mudflap proverb or gem of wisdom. And he signs off with his signature over and out.

It’s an enjoyable read from start to finish. I’m looking forward to the second book in the series Mudflap—the Gloves Come Off. A brilliant read…Katherine Black, over and out.