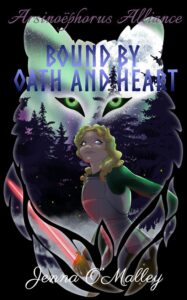 This is one of my favourite indie authors and the best book I’ve read this year. It’s book two and the second book in the Arsinoëphorus Alliance series, the first being Bound by Fate and Blood.

I have a rule when it comes to series writing. The subsequent books have to be equally as good as the first. Otherwise, it’s time to give up or take a break from them. Ms O’Malley hasn’t let us down, and this book is every bit as good as the last.

It opens rugged and robust. The author (no spoilers) has taken a current issue in the modern world and showcased it. The idea was so clever that it made me go, ‘Wow.’ She’s taken the concept of the problem, given it a twist, interwoven it with magic and sent it back in time 400 years. It’s inspired.

Sometimes I give the books I’ve read a single word to describe them. The word for this book would be imaginative. I’ve read the author’s secret and know where she draws her inspiration, but I’m not telling.

In this second book, the misfit band of merna are scattered all over Europe. They’ve been separated by battle and must train and prepare for the next clash with the enemy merna and hunters (yes, I know it should be capitalised, but it doesn’t look right out of context).

We leave Nephtyri and Ian in this book to follow Bjorn, the mean and moody Lycan and his love interest, Rochelle. However, our previous heroes still play a big part in the book, so we don’t lose touch with them.

Much of this novel is spent in the freezing snow-covered wilds of Northern Europe during the winter months. The band are holed up and under attack. It gives the author time to delve deeper into character and psyche. Inevitably they get ready to meet the enemy head-on. They have a new arsenal of ingenuity to fight with—but there are losses.

At the close of the book, the factions are re-banding to count their losses and lick their wounds. We begin Book 3 with them en route to Paris–via Denmark, where they must locate the ancient tomes holding vital secrets. We are introduced to a new character who I’m very much looking forward to reading.

Do yourself a favour and buy this book to add to your autumn reading list.

Knocked it out of the park, O’Malley.