Home »Book Reviews»Review of The Institute by Stephen King 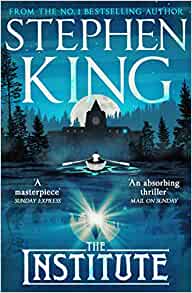 I enjoyed this book and would give it a solid 6 out of 10. Well worth a read, the story is engaging and the characters believable. I looked forward to getting the day’s work done to be able to sit down and read. The parts around the institute were interesting and held you in the story.

What I found very intelligent and thought out (no spoilers) was that he put forward a valid reason for what was happening, misguided by the characters and off-the-wall but a reason that explains their actions.

However, for a writer so experienced and accomplished, I found the writing sloppy. Apart from Rowling, this is the bestselling author of modern times and the book is littered with parenthesis (like this) which surprised me, and he uses so many adverbs and throw-away words almost, a little, rather. People are rather tired and rather hungry. I guess the sentence All in all she was an out and out psycho was deliberate alliteration, but the book is full of sentence like this. Some parts felt drawn out and I think if the book was cut by 50 pages it would be a stronger read.

All that said, it’s true King style. It’s a story you would expect from him and he does it well. I would recommend this book because you can’t go wrong with Stephen King and it’s exactly what it says on the can—a very enjoyable read.